FIFA WC: Messi terms bond with Argentina fans beautiful, thanks them for support 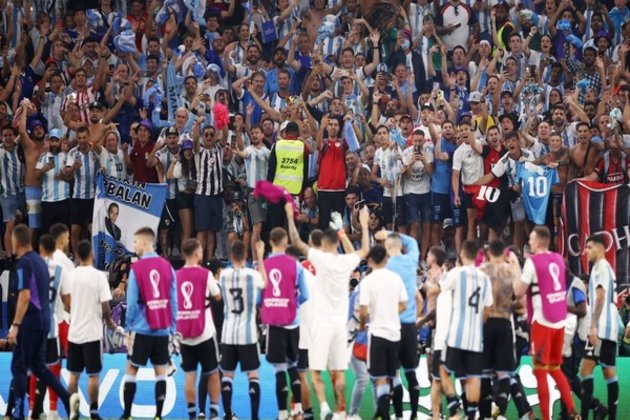 Al Rayyan [Qatar], December 4 (ANI): Messi defined Argentina's relationship with their fans as something beautiful and thanked them for their unwavering support when receiving his player of the match award after the team's win against Australia.

Messi scored the first goal for Argentina in the round of 16 clash against Australia and played a pivotal role in the team's win. The football maestro scored his 9th goal of the World Cup to surpass legend Diego Maradona, who had 8 goals to his name in the World Cup.

It was also the Argentine's first goal in the knockout stage. The goal made him the second-highest scorer for Argentina in World Cups, only one goal behind Gabriel Batistuta.

While receiving the award he mentioned how all of Argentina would want to be here to witness the team play and labelled the relationship with the fans as beautiful.

"The whole of Argentina would like to be here, but it's not possible. I think there's this bond that we have, this union, which is something beautiful. These are amazing feelings. I'm really happy to share this beautiful moment, these happy moments with them all," described Messi as quoted by Sky Sports.

The Argentina star lauded the fans who are flocking to the stadium to support the team while also mentioning the football fanatics who are enjoying the games back at home.

"The effort they are making to be here with us in every single match. I know how much they enjoy it back in Argentina. It's unbelievable what they transmit, the passion, their energy, their joy and we're very thankful. It's unbelievable," said the talismanic forward.

Argentina stormed into the quarterfinals of the FIFA World Cup after defeating Australia 2-1 in a thrilling Round of 16 clash at the Ahmad bin Ali Stadium on Sunday.

Argentina changed their strategy immediately after the break, switching to a three-man defence after taking a one-goal lead in the first half. They scored their second goal as a result of the tactical switch as they caused Matt Ryan to make a terrible error. It was Julian Alvarez who profited from it.