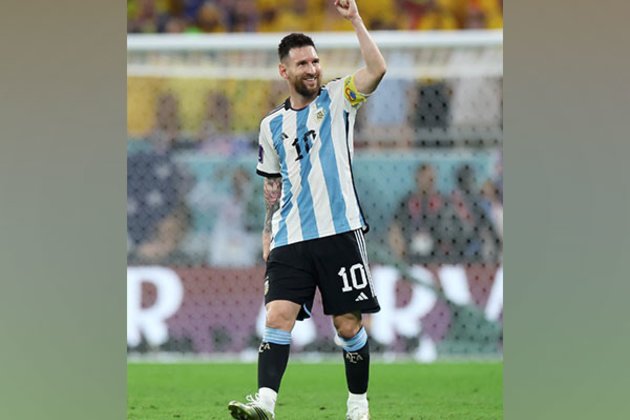 Ar-Rayyan [Qatar], December 4 (ANI): Lionel Messi proved his mettle once again as he scored for Argentina to give them a 1-0 lead against Australia at the Ahmad bin Ali Stadium in a Round of 16 encounter on Sunday.

The football maestro scored his 9th goal of the World Cup to surpass legend Diego Maradona, who had 8 goals to his name in the World Cup. It was also the Argentine's first goal in the knockout stage. The goal made him the second-highest scorer for Argentina in World Cups, only one goal behind Gabriel Batistuta.

Talismanic forward Lionel Messi was targeted by the Aussie players who had him surrounded by their defenders for reasons known to mankind.

Messi was prodding forward every now and then but the Argentine was kept in check by the Aussie defenders.

Australia ran into the box in the 19th minute through Aziz Behich but was kept at bay by a solid Argentina defence line.

The 2021 Copa Americans enjoyed greater possession but the Aussie team were not intimated and kept their composure to finally had a chance at scoring in the 29th minute.

Glances were exchanged between Messi and Behich as both played ferociously to take control of the ball. They got into a confrontation which had to be resolved by the referee.

But this little exchange fuelled the Argentine and cost the Aussies a goal as Messi scored in the 35th minute. The Paris Saint-German (PSG) star blasted a fine low curling shot from inside the box to beat Australia goalkeeper Ryan to give Argentina a 1-0 lead.

The first half came to an end with the crowd going berserk with cheers of Messi echoing throughout the stadium and Argentina leading Australia 1-0.

Argentina will be favourites going into the second half having taken a one-goal lead and being ranked third in the world in contrast to Australia who are ranked 38th. (ANI)