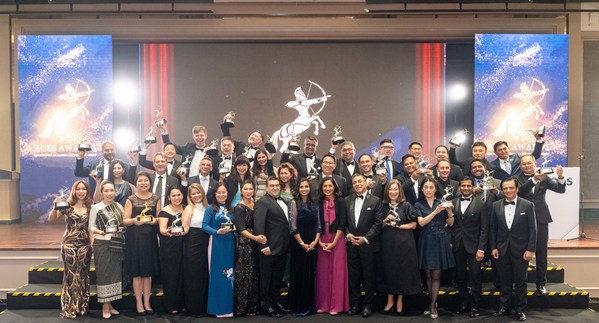 Winners of the ACES Awards 2022. The 9th edition of The Asia Corporate Excellence & Sustainability Awards concluded with great success, on the 18th of November 2022, at the JW Marriott Kuala Lumpur. Over 470 submission were received, of which 93 were selected as winners across several award categories.

"Since the very beginning our vision is to give prosperity for all stakeholders and that means we have to be sustainable to be sustainable per se," said Purnomo or Ibu Noni as she is fondly known who won the Woman Entrepreneur of the Year Award at the ACES 2022.

"So since the very beginning we always embed (sustainability) in our policies, in our business processes, everything we do including doing our maintenance to make sure every single vehicle is in prime condition when they're doing their operations to launching the first fleet of electric taxis in 2019 in Indonesia.

"And we strongly believe by focusing on sustainability, not just electric taxis and so forth, but also on how we can engage with the community - we launched the women empowerment program, we gave scholarships to the children of our drivers, all of those things really contributed to the growth of our businesses for 50 years now."

Indonesia is one of the 17 nations which had their winning businesses and individuals present at ACES 2022 - all of whom were greeted by the thunderous drumming of Malaysia's Hands Percussion and the classical embodiment of the Selangor Philharmonic Orchestra.

This year was especially significant for its 470 nominees, 159 finalists and 93 winners across 26 various categories as the ACES gala dinner is back after a two-year physical hiatus.

"Though many restrictions on travel have been lifted, international and cross-border movement is still a little more challenging than it used to be in the pre-Covid days.

"It is therefore very heartening to see the number of foreign winners who consider their win at ACES 2022 to be significant enough for them to travel to Malaysia. It is therefore imperative for us, as the organizers, to give our winners a night to truly remember," said MORS Group Chief Executive Officer Shanggari Balakrishnan.

She also said the awards proved that true value does not diminish over time as the turnout underscores the eagerness of participants to reconnect, and share learnings gleaned from their individual trials during the pandemic.

No rush to award wins at ACES

Held at the JW Marriott Hotel on November 18, it was the first time that the ACES has been hosted in Kuala Lumpur during its nine-year history, despite it being birthed in Malaysia by the MORS Group.

The ninth edition of the ACES saw 62 winners attending the award ceremony which recognised their services and achievements at both large and small businesses as well as their contributions to communities and the world.

"ACES awards has always been special due to its nationalistic element reflected by the very presence of companies and individuals from nations in the Asia Pacific, all bringing with them their colourful and distinctive culture, costumes and languages."

"There is also an exciting blend of new and established businesses which distinguished themselves by the way their organizations are run, and the leadership approaches undertaken by the management of those corporations," said Balakrishnan who was flanked by Chairman of the ACES Awards Hemant K Batra and the jury panel Dr. Jayanthi Desan and Luis Bueno Nieto.

Batra noted that the ACES jury did not rush to award wins to the nominees despite 2022 being the "back to face-to-face" year.

"If truth be told, there were some award categories which did not have winners, simply because the jury was unwilling to lower its exacting judging standards. We need to uphold certain standards and requirements, and as such we preferred to withhold certain awards instead of bestowing them to nominees who had yet to hit all marks," said Batra.

Other winners included Malaysian corporation Gamuda Berhad which claimed the award for Top Workplaces in Asia. Another Malaysian business entity, Sunway Lagoon, was also recognized at the ACES 2022 as one of three winners of the Community Initiative Award, alongside CPC Corporation, Taiwan, and Traphaco Joint Stock Company, Vietnam.

This Award is presented to organizations that are creating new pathways and piloting a change of course through grassroot sustainable initiatives.

The host nation also laid a proud claim to Dr. Ir. Beh Kooi Ho, Chief Executive Officer, SD Associates Sdn Bhd, who was named Asia's Most Admirable Young Leader, an award which is presented to change makers with the grit, foresight and commitment to positively impact the communities they serve in.

The ACES 2022 saw a total of 450 invited guests this year which also birthed the ACES Circle, an informal but powerful think tank made up of winners of past and present ACES Awards.

This was created to help drive through Environmental, Social, and Governance Goals in collaboration with the Organisation for Economic Co-operation and Development.

With insights from the ACES Circle, MORS Group endeavors to assist companies, corporate leaders, and industrialists in learning from market experts across the world, to engage stakeholders and employees in valuable ways - to embrace a culture of progressive learning, so as to propel businesses in Asia towards continued sustainable growth.

For more information on the ACES Awards, please contact Nashdev Singh at nashdev@morsgroup.com.

*PR Newswire is the Official Media Partner of ACES Awards 2022.