SINGAPORE, Sept. 27, 2022 /PRNewswire/ -- Gemie is delighted to announce that P1Harmony will join as Gemstars to bring K-pop fans to the metaverse. The breakout stars will leverage Gemie's team and platform as another touchpoint to connect with fans through interactive digital experiences and collectibles. 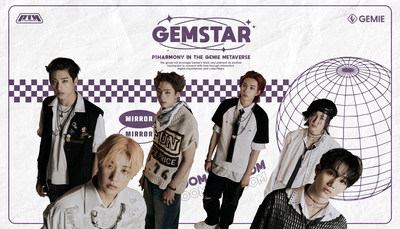 Despite debuting in the midst of a pandemic, P1Harmony is making strides in the industry with their ability to dominate the stage in live performances. With the release of their first EP, DISHARMONY: STAND OUT, movie, and latest hit "Gotta Get Back" in collaboration with Pink Sweat$, the group has captured the attention of Korea-based and international fans with their talent and charisma. P1Harmony has a strong interest in engaging with their fans in unconventional ways, making them the perfect addition to the Gemie talent roster.

Equipped with decades of experience in the entertainment and gaming industries, Gemie's team strives to use its metaverse platform as a bridge between traditional entertainment players and the world of Web3. By bringing their merchandise and experience concepts to life, Gemie will offer a one-stop solution for artists and celebrities to realize their virtual ambitions. With Gemie, artists and celebrities will be able to launch collections with exclusive rewards for holders and host virtual events with stunning designs, activities, and games in the metaverse.

P1Harmony has said, "We've received tremendous support and enthusiasm from our fans in the past two years, and we've been trying to find the right channel to show our appreciation. Even though it's still difficult for us to see many of our international fans in person, we believe that Web3 solutions will be able to bring us closer together. We are very excited to join Gemie as Gemstars and to explore the different opportunities it offers to improve how we can engage with fans - we can't wait to meet our beloved fans in the metaverse!"

John, the co-founder of Gemie has said, "We've always believed that it should be easier for the global audience to access the unique entertainment content offered by Asian talent, and we hope that Gemie will become the platform to make that happen. The Gemie metaverse will help Asian celebrities and artists create their ideal worlds to connect more closely with their fans, and we are so enthusiastic about having P1Harmony onboard to represent rising talent in the K-pop scene and explore the numerous opportunities at the intersection of K-pop and Web3."

To bring this all to life, Gemie is connecting with major players in the Asia entertainment landscape. According to the founding team, they are currently in discussions with other K-pop and J-pop idols to bring them into the metaverse. They have also accelerated the development of their platform and marketing. For instance, Gemie has recently launched Alpha, allowing early users to create their own custom avatars, decorate their own Gemie Rooms, and explore the Gemie Town Square to complete missions and earn rewards. Click here to check out more about Gemie Alpha.

Gemie is an Asia-based celebrity metaverse platform. Founded in 2021, Gemie aims to reinvent the entertainment industry by directly connecting celebrities and fans through customized virtual planets and digital collectibles.

The six-member boy group P1Harmony, composed of KEEHO, THEO, JIUNG, INTAK, SOUL, and JONGSEOB (ranging from ages 16 to 20), entered the mainstream music market with their breakout EP "DISHARMONY : STAND OUT and its title track 'SIREN' on October, 2020, with all five tracks written or co-written by the band. P1Harmony made their debut in historic fashion with the release of the box-office production film 'P1H: A New World Begins', co-starring some of the biggest names in Korean Entertainment. The sci-fi film hit Korean cinemas and smashed the box office even with COVID-19 restrictions. 'P1H: A New World Begins' stars P1Harmony members and tells the story of P1Harmony's newly created K-POP cinematic universe of boys from different dimensions who gather together to find the 'Star of Hope'. A 20-minute highlight version of the movie was premiered through Amazon Music's Twitch channel which was followed by an exclusive interview with well-known KPOP journalist Jeff Benjamin.

Their album created mainstream buzz and the group was selected as one of '2021's New K-POP Stars To Listen To' by Vogue magazine while the single "Siren" also hit TOP 10 in the US iTunes K-POP chart and earned the group recognition from various media outlets. The band also performed live on 'Rolling Stone on Twitch' and received coverage of their promo tour in the States with international outlets such as Rolling Stone, Time, Billboard, New York Times, Forbes, Vogue/Teen Vogue, NME, Refinery29, BuzzFeed, Allure, Popcrush, Billboard and more.

In addition, P1Harmony has continued to make waves by covering well-known songs such as 'Maniac" by Conan Gray, Billie Eilish, "good 4 U" by Olivia Rodrigo, and recently "At My Worst" by Pink Sweat$'. Their first-ever online fan meeting in January, 2020 reached over 300,000 viewers from 136 countries with top audiences coming from USA.

More recently, P1Harmony completed their first ever concert tour from March ~ May, 2022, in the US with all 11 tour dates selling out in less than 30 minutes. Last but not least, the band made another surprise by collaborating with R&B singer, songwriter, and producer Pink Sweat$ with the song "Gotta Get Back", released on May 26, 2022.

With their fast-growing stardom and greater-than-ever success into 2022, P1Harmony is looking to continue its momentum and reach new career heights as well as global recognition through an aggressive promotion strategy in the US. They have already established themselves as one of the more dynamic and exciting K-POP groups with high quality music and scene-stealing performances and will continue to build on that momentum with a keen focus on connecting with International audiences.

WASHINGTON, D.C.: According to a Pentagon report, if China continues with its current nuclear buildup pace, it could have a ...

William, Kate plan US trip in bid to tamp down royal controversies

LONDON, England: Prince William and his wife Kate, the new Prince and Princess of Wales, will travel to the U.S. ...

SYDNEY, Australia: For the first time in eight years, Australia lowered its terrorism threat level from "probable" to "possible," due ...

TRENTON, New Jersey: As part of a project to prevent major wildfires in a federally protected New Jersey forest, up ...

VIENNA, Austria: During a 24-hour strike by Austrian rail workers held this week over issues related to pay, rail traffic ...

HONG KONG: Paving the way for a potential bumper payout to shareholders, HSBC has agreed to sell its business in ...

WASHINGTON D.C.: The National Retail Federation (NRF) has reported that even as inflation has negatively affected many household budgets, heavy ...

IRVING, Texas: Exxon Mobil Corp will wind down oil production in Equatorial Guinea in West Africa after its license expires ...