BEIJING, Sept. 13, 2022 /PRNewswire/ -- During the 2022 China International Fair for Trade in Services (CIFTIS) which was concluded in Beijing on Monday, many international enterprises signed cooperation agreements with China to deepen cooperation in service trade, reflecting the strong attraction of the Chinese market for foreign investment. 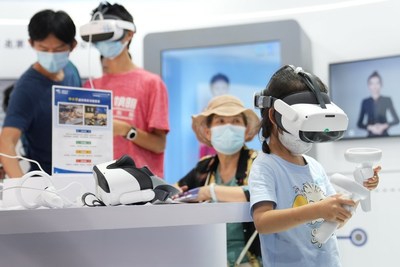 As one of the world's largest and most comprehensive fairs for trade in services, the 2022 CIFTIS has achieved fruitful results in boosting international cooperation.

During the Fair, Air China and the British engineering giant Rolls-Royce announced to set up a new joint venture of engine maintenance, repair, and overhaul (MRO) in Beijing, with a registered capital of 190 million U.S. dollars.

"Although it is the first time to participate in the CIFTIS, we are very optimistic about the cooperation with China," said Cao Qian, government affairs manager of Italian law firm D'Andrea & Partners Legal Counsel, adding that the firm has set up offices in Beijing, Shenzhen and Hong Kong in recent years, hoping to find more cooperation opportunities through the services trade fair and help the development of high-end legal services in China.

"We already have deep partnerships with our Chinese industrial partners," said Hou Mingjuan, global vice president of Qualcomm, adding that China's commitment to high-quality development through high-level opening-up has given multinational companies like Qualcomm the confidence to continue and further expand cooperation with Chinese customers.

According to Ouyang Rihui, assistant dean of the China Center for Internet Economy Research at the Central University of Finance and Economics in Beijing, China's service sector is creating a "magnet effect" in the world.

LONDON, England: The non-profit organization Presidium Network has announced that five British prisoners of war captured in Ukraine have been ...

KUALA LUMPUR, Malaysia - Southeast Asian nations must decide whether a five-point plan to end the violence in Myanmar is ...

NEW DELHI, India - The Indian state of Tripura has decided to form a special investigation team (SIT) of local ...

HALIFAX, Canada: Cyclone Fiona struck northeast Canada this weekend, with reports of houses being washed into the ocean, roofs torn ...

SYDNEY, NSW, Australia - An extraordinary plunge in the British pound to an all-time low on Monday has spooked investors, ...

AUSTIN, Texas: Due to increased risks caused by a fault in its automatic window reversal system, electric vehicle maker Tesla ...

PARIS, France: Throughout northern and western Europe, vegetable producers are considering not planting crops due to the financial effects of ...

SAN FRANCISCO, California: Amidst declining margins and weak sales of outdated clothes of its brands, including Old Navy and Banana ...

Many forced out as US rental apartments jump 10% in price

WASHINGTON D.C.: Young workers in the U.S. have been the group most harmed by surging rental prices, with many taking ...