RIYADH, Saudi Arabia, Aug. 24, 2022 /PRNewswire/ -- Falconers from around the world are set to attend the fourth annual International Saudi Falcons & Hunting Exhibition in Riyadh. The event has already attracted global attention from local and international falconers ahead of the launch of the International Falcon Breeders Auction, organized by the Saudi Falcons Club in conjunction with the exhibition's activities, especially with record numbers recorded in the first edition of the international auction. The world's most expensive falcon "Gyr Qarmousha" (Falco Rusticolus) was sold for 1.75 million SAR ($466,000), which was owned by the American falcon breeding center, Pacific Northwest Falcons, widely regarded as one of the best falcon farms in the world. 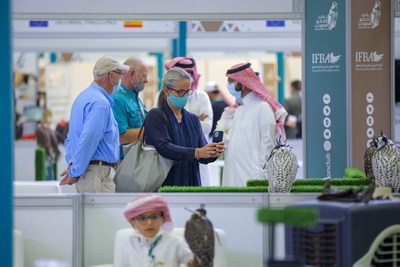 Saudi Arabia prides itself on its position as a global destination for heritage tourism in the field of falconry, as well as in the field of preserving the cultural and civilizational heritage of the region. The event is expected to record a 30% increase in the number of participants and will take place in the Saudi capital, Riyadh, on August 25th featuring falcon breeding centers from around the world, including the United States, France, Spain, Poland, Germany, Denmark, Belgium and the Czech Republic. In addition to their world-class falcons, Gulf and Saudi Arabian companies will showcase their various products through the exhibition's 25 pavilions.

Saudi Arabia has succeeded in integrating the financial transactions services for the products of the exhibition within the electronic payments program, where all purchases of weapons, ammunition and accessories are made only through the electronic platform of the Saudi Falcons Club, where the value of commercial transactions during the exhibition is expected to increase by 25% compared to last year's figures.

In its fourth edition, the exhibition will run for 10 days and is expected to see a strong presence of elite falcons and hunting weapons presented for the first time, in addition to the customized 4x4 vehicles exhibit. A special pavilion has been allocated for modified and rare four-wheel drive cars, as well as for four-wheel bikes to meet the different climatic and environmental conditions facing hunting and outdoor travel enthusiasts. It's expected that the exhibition will also see the entry of new exhibitors of customized 4x4 vehicles from around the world.

MOSCOW, Russia: After her on-air protest against Russia's invasion of Ukraine, TV journalist Marina Ovsyannikova has been placed on Moscow's ...

US prepares to send more HIMARS missiles to Ukraine

WASHINGTON D.C.: As part of a $625 million package, the Biden administration's next military assistance for Ukraine will include an ...

WASHINGTON D.C.: In August, U.S. job openings fell by the highest level in nearly two and a half years, indicating ...

LONDON, England: After limiting the number of passenger departures since July to prevent long queues, baggage delays and flight cancellations, ...