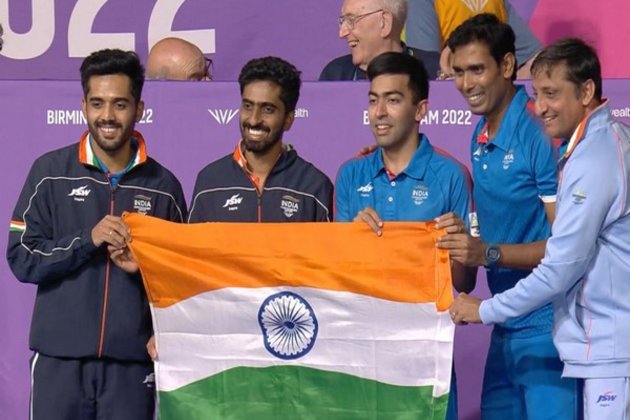 Indian men's table tennis team clinched the gold medal defeating Singapore 3-1 in the final at the ongoing Commonwealth Games 2022 in Birmingham on Tuesday. It was another dominant performance by the Indian paddlers.

"Great news in Table Tennis! Congratulations to the dynamic team of G. Sathiyan, Harmeet Desai, Sharat Kamal and Sanil Shetty for winning the Gold medal at the CWG. This team has set high benchmarks, be it in skill or determination. Best wishes for their future endeavours," tweeted PM Modi.

President Droupadi Murmu also congratulated the team for their accomplishment.

"Congratulations to Sathiyan Gnanasekaran, Sharath Kamal, Harmeet Desai and Sanil Shetty for winning the historic gold in table tennis at CWG2022. They showed extraordinary skill and determination. They have won the heart of the nation. I am sure this feat will inspire our youth," tweeted the President.

"Another magical GOLD A stellar show by the Indian Men's Table Tennis team. Exhilarated by the way, our paddlers led by Sharath Kamal, G. Sathiyan and Harmeet Desai outclassed the formidable Singapore 3-1. We defended the crown successfully!" tweeted Thakur.

Talking about the event, in the first match at the NEC Table Tennis Show Court 1, Harmeet Desai and Sathiyan Gnanasekaran went up against Yong Izaac Quek and Yew En Koen Pang. The Indian pair was firing on all cylinders and looked more comfortable in the second game as they took an early lead and closed out the game 11-7.

India are the defending champions in the men's team table tennis final.

In the second match of the final, Sharath Kamal Achanta took on Zhe Yu Clarence Chew. The first game was tough for the Indian ace as he went down 7-11 against his Singapore rival.

In the third match, Sathiyan Gnanasekaran locked horns with Yew En Koen Pang. The Indian player made a remarkable comeback and won it 12-10.

In the second game of the third match, Pang beat Sathiyan 11-7 but the Indian player kept on the pressure and won the third game 11-7 and eventually the match.

India have so far won five gold, three silver and bronze medals in the games and are placed sixth in the medals tally. (ANI)