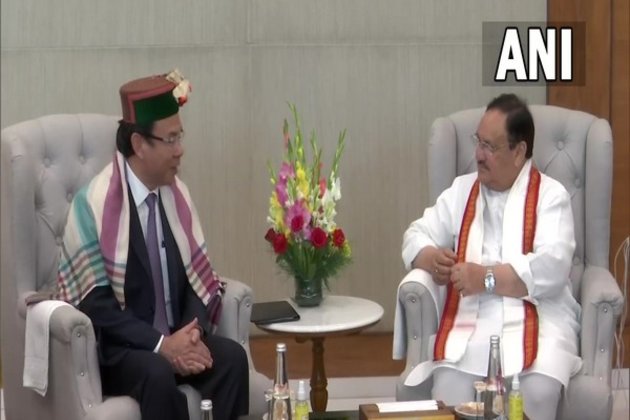 This New Delhi meeting is the continuation of the BJP's outreach programme "Know BJP" through which the BJP President is interacting with foreign dignitaries. The "Know BJP" campaign was started on the party's 42nd Foundation Day on April 6, 2022. Its second phase was held on May 16, 2022, while the third meeting took place on June 4, 2022.

"Know BJP" campaign is the BJP's initiative to introduce the party's vision, mission and work culture to different countries of the world. Under this program, Nadda has so far interacted with Nepal Prime Minister Sher Bahadur Deuba, Minister for Foreign Relations of Singapore Vivian Balakrishnan and also envoys of 47 countries.

The Foreign Affairs Department, in its newest avatar, was launched by the then BJP President Amit Shah in November 2014 with Chauthaiwala as its Chairman.

On June 11, Nadda met the envoys of 13 foreign countries and said that is a need for better communication between the political systems and political parties of different countries to understand the vision of each other.

Earlier, Nadda interacted with "Head of Missions" from 13 countries at the party's central office in the fourth phase of the "Know BJP" campaign. Addressing the visiting diplomats, Nadda said, "It is our belief that there should be better communication between the political system and political parties of different countries so that we can understand the vision of each other."The BJP firmly believes in a healthy democracy and shared cultural ties, he said.

The talks come as the two countries celebrating the Golden Jubilee of diplomatic relations."EAM and the Foreign Minister of Vietnam had a bilateral meeting and also launched the logo for the celebration of 50 years of diplomatic relations. The meeting was held at the new Chancery building of the Embassy of Vietnam. The Ministers discussed a wide range of bilateral issues and regional and international developments of mutual interest" said the Ministry of External Affairs (MEA) in a statement.

Last month, India and Vietnam held the 12th round of Political Consultations and the ninth round of Strategic Dialogue between the foreign ministries of the two countries and explored new opportunities for partnership to support each other's economic development and national security.

"Both sides exchanged views on regional and international issues of mutual interest, especially in the context of the global impact of the COVID-19 pandemic and the on-going crisis in Ukraine, as they explored new opportunities for partnership to support each other's economic development and national security," a Ministry of External Affairs release said.

The release said Secretary (East) reaffirmed India's position of regarding Vietnam as a key partner in our Act East Policy and the Indo-Pacific Vision. (ANI)

WASHINGTON D.C.: In a cardboard box factory outside Baltimore, people have been walking into the office of Paul Centenari, chief ...

DELFT, Netherlands: IKEA officials said this week that the furniture retailer's warehouses in Europe are as full as they were ...

WASHINGTON D.C.: Due to the record high trade deficit and a resurgence in COVID-19 infections that curbed spending on services, ...