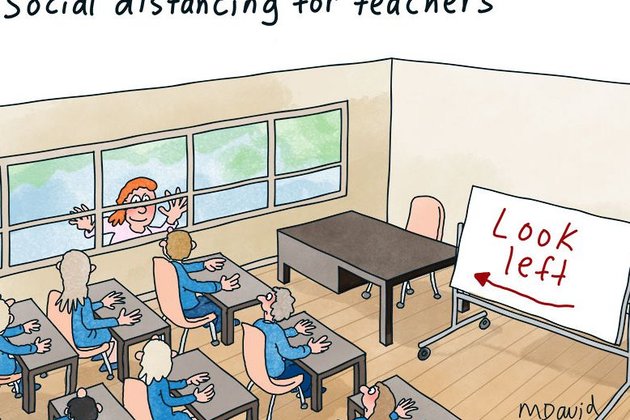 We have paid a high price during the pandemic for poor ventilation and underestimating the risk of aerosol transmission, writes Dr Kim Sawyer.

ONE OF THE great puzzles of this pandemic is why we haven't talked more about ventilation.

Air conditioning seems to have gone under the virus radar. It's not the economy we should be focusing on - it's the air. However, we failed to understand. Naming the disease COVID-19 rather than SARS2 was a mistake. Severe Acute Respiratory Syndrome (SARS) provided all the evidence we needed. The air was always the key.

During the 2003 outbreak of SARS, there was an example in Vietnam I have often referenced. Sixty-one patients with SARS were hospitalised in two different hospitals. In the first hospital, extensive transmission of SARS occurred to healthcare workers and visitors, and five patients died.

Australia suffered from having no pandemic plan

Damage done by the COVID-19 pandemic was worsened in Australia due to a lack of preparation and effective management.

Why did we not look closer at SARS? The World Health Organization (WHO) should have. It took an open letter from 239 scientists for the WHO to finally acknowledge the importance of airborne transmission. The scientists who wrote it were beyond reasonable doubt the virus spreads indoors through aerosols.

Aerosols can travel about three metres as we are finding out with Omicron. Closed indoor settings maximise the risk, yet governments quarantined those infected in hotels with poor ventilation. Quarantine hotels were like cruise ships - they incubated the virus.

A study at the University of Oregon confirmed that opening a window can reduce the amount of coronavirus in a room by as much as one-half. Researchers studied students who had tested positive for COVID. The students were placed in single rooms in a dormitory for an isolation period. The researchers found the virus spreads from infected people into the air in a room and that the more virus they're carrying, the more virus builds up indoors. Opening windows significantly reduces the environmental viral load.

Closed indoor spaces establish explosive increases in the total viral load, like a chain reaction. This is consistent with evidence from Wuhan where household transmission accounted for 80 per cent of cases.

When four residents shared an apartment, the younger members were infected first because of greater social interaction. They usually had mild symptoms or no symptoms at all and were not admitted to hospital. However, in an apartment with poor ventilation, they infected others. The total viral load in the apartment increased exponentially. The most severe cases in intensive care units in Wuhan had viral loads 60 times those with mild symptoms.

We have paid a high price during the pandemic for poor ventilation and underestimating the risk of aerosol transmission.

Teachers are expressing concern over the Government's rush to send kids back to schools while the pandemic is worsening.

In Victoria in 2020, 11 per cent of those who contracted COVID acquired the virus in hospital. More than 3,500 health care workers were infected - half worked in aged care but nearly 1,000 worked in hospitals. Yet even as late as November 2020, the Infection Control Expert Group (ICEG) which advised our National Cabinet said the use of personal protective equipment (PPE), including masks and respirators, was relatively low in the hierarchy of controls for managing risk.

They underestimated the airborne risk. By the end of 2020, the risk was better understood. The Victorian Government audited ventilation at 21 locations in Victorian hospitals. Hospitals have been reconfigured through the installation of negative pressure zones and modification of ventilation systems. The question remains why a separate facility with good ventilation specifically designed for COVID was not established.

COVID-19 has implications for the design of hospitals. Researchers in Singapore have designed a hospital with open-air sides, a canvas roof and ceiling fans to maximise airflow. The design may not be right for Australia, but it does suggest we need to think more laterally about hospital design.

Founder of modern nursing Florence Nightingale said wards of hospitals should have high ceilings, natural light and be well ventilated. She lived in a different era, but she was right. We need a better mix of air.

There are more general implications. Ventilation ensures the distribution of contaminant particles is more uniform throughout indoor spaces. This principle applies to the aerosols of a virus but also to particles like asbestos fibres. I know of a building in Melbourne where there was a cancer cluster. The building had no opening windows - the building was riddled with asbestos.

Do we know the quality of air where we live and work? Typically, we do not. The implication is that we must now reconsider the design of buildings and natural and mechanical ventilation.

It was always in the air.

Dr Kim Sawyer is a senior fellow in the School of Historical and Philosophical Studies at the University of Melbourne.

Which individual should we ignore? Phelps focuses on children's health

Mainstream news media reported yesterday a "clash" between another medical practitioner and me on social media.