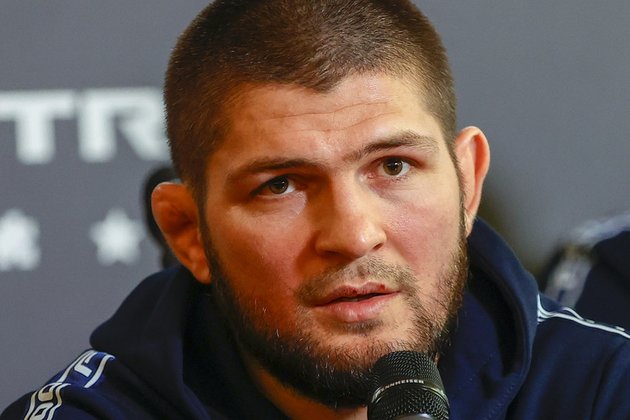 Khabib Nurmagomedov was unable to make a planned appearance in the corner of fellow Dagestani Saygid Izagakhmaev at the ONE Championship: Heavy Hitters event in Singapore after testing positive for coronavirus, it was reported.

Having definitively called time on his own undefeated career, Khabib has turned to nurturing MMA fighters from his homeland, including ONE Championship contender Izagakhmaev.

Former UFC ruler Khabib had traveled to Singapore for Izagakhmaev's lightweight bout on Friday against James Nakashima of the US.

But as revealed by the ONE Championship commentary team, 'The Eagle' was instead confined to his hotel room after testing positive for the virus.

Khabib, 33, has not given an update on his condition on his social media channels, but did say on Instagram Stories that he was 'so happy' after Izagakhmaev recorded a second-round submission victory in the absence of his friend and mentor.

Izagakhmaev improved his professional MMA record to 20 wins and two losses with his performance at the Singapore Indoor Stadium.

Would a new Cold War be in the best interest of the United States?

As China unleashed live-fire military exercises off the coast of Taiwan, simulating a real "reunification by force" operation in the ...

NAYPYIDAW, Myanmar - According to a legal official, a court in Myanmar has sentenced former leader Aung San Suu Kyi ...

BEIJING, China: Following a meeting between their foreign ministers, China and Nepal have agreed to build the Trans-Himalayan Multi-Dimensional Connectivity ...

SACRAMENTO, California: California Governor Gavin Newsom is proposing to give a $1.4 billion government loan to extend the life of ...

NEW DELHI, India: A government order released to reporters this week said New Delhi will continue to enforce a mask ...

U.,S. stocks back on the defensive, Nasdaq drops 164 points

Thailand to spend $62 billion to build industry in east

BANGKOK, Thailand: Thailand seeks to invest $61.97 billion in its industrial eastern region over the next five years, in a ...

JEDDAH, Saudi Arabia: In a Twitter post published this week, Saudi Arabia's Kingdom Holding said it had invested in Russian ...

Asian stocks rally across the board, Nikkei 225 surges 354 points

DHAKA, Bangladesh A preliminary investigation into the tragic crane accident that killed five people in Uttara on Monday has found ...

HANOI, Vietnam: The Vietnamese government is considering building a high-speed railway, with a possible cost of up to $58.7 billion, ...

The Shape of Water