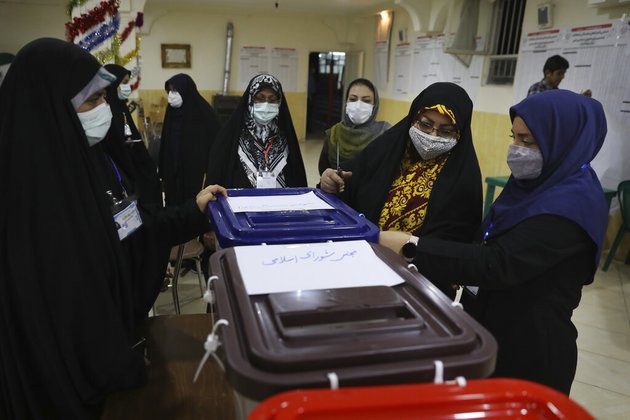 Iranians are voting Friday in a presidential election marked by low turnout.

Iran's semiofficial Fars news agency reported that 37% of the country's 59 million eligible voters had cast ballots by 7:30 p.m. local time, with 4½ hours remaining until the official close of voting. There was no immediate confirmation from the Iranian interior ministry, which was managing the election.

Analysts said much of the electorate appeared disenchanted with the nation's Islamist rulers for mismanaging an economy ravaged by U.S. sanctions, a prolonged pandemic and official corruption.

Iranian state-approved pollsters had predicted before the election that the turnout percentage could end up in the low 40s, which would mark a record low for a presidential election since Iran's 1979 Islamic Revolution, in which its ruling Shiite clerics seized power from a collapsing monarchy. The previous low turnout was 50% in 1993.

Social media posts from inside Iran also indicated that voting was light at polling stations around the country. Iranian state TV showed close-ups of voting lines at some sites as leading political figures implored people to vote, from Supreme Leader Ayatollah Ali Khamenei to outgoing President Hassan Rouhani and presidential candidate Ebrahim Raisi, the ultraconservative Iranian judiciary chief and Khamenei protege whom many Iranians expect to easily win the race.

Voters queue at a polling station during the presidential elections in Tehran, Iran, June 18, 2021.

Iran's Guardian Council, the constitutional watchdog tasked with approving candidates, allowed only Raisi and six other lesser-known Khamenei loyalists to run in the election, barring hundreds of other presidential hopefuls, including several politicians who have prominent public profiles comparable to Raisi's. The disqualifications sparked a weekslong campaign by Khamenei's Iranian critics inside and outside the country to encourage a boycott of what they described as a sham election.

"I believe the low turnout will lead to a worsening crisis of legitimacy for the Iranian regime," Ladan Boroumand, a director of U.S.-based rights group Abdorrahman Boroumand Center, said Friday in a VOA Persian TV interview. "That is why the ruling system has always put emphasis on voter participation and used all possible means to bring people to the polls."

If none of them wins an outright majority, a runoff election would be held one week later. Results from Friday's vote were expected to be released on Saturday at midday local time.

Raisi, who campaigned on a pledge to fight corruption, would be the first Iranian president to take office while under U.S. sanctions if he wins. Washington has sanctioned Raisi for alleged involvement in Iran's mass executions of political prisoners in the late 1980s.

Ebrahim Raisi, a candidate in Iran's presidential elections, raises his hands as he casts his vote at a polling station in Tehran, Iran, June 18, 2021.

Regardless of who wins, Khamenei remains Iran's ultimate decision-maker in matters of foreign and nuclear policy. All the approved presidential candidates backed his decision to engage in indirect talks with the U.S. in Vienna in recent months in the hope of reaching a deal for an easing of U.S. sanctions on the Iranian economy.

President Joe Biden's administration has said it could ease the sanctions if Iran agreed to resume curbs on nuclear activities that could be weaponized. Tehran accepted those limits in return for relief from international sanctions as part of a 2015 nuclear deal with world powers, known as the Joint Comprehensive Plan of Action. But Iran began violating the nuclear curbs in 2019 in retaliation for then-President Donald Trump's decision the previous year to withdraw from the JCPOA and unilaterally tighten U.S. sanctions.

Trump said the JCPOA did not do enough to prevent Iran from developing nuclear weapons - a goal it denies having - or engaging in other objectionable activities. Biden has said a mutual U.S. and Iranian return to JCPOA compliance would be a precursor to a U.S. effort to negotiate a stronger and longer agreement addressing other issues.

Farhad Rezaei, an Iranian politics professor at Canada's York University, told VOA Persian TV in another Friday interview that an election victory for Raisi, a more conservative figure than the outgoing Rouhani, could make it tougher for Biden to persuade Iran to reach a follow-up agreement to the JCPOA.

"But because Iran's foreign policy, especially relating to the U.S., is the exclusive domain of Khamenei, whoever becomes the next president is likely to follow the same long-established rules," Rezaei said.