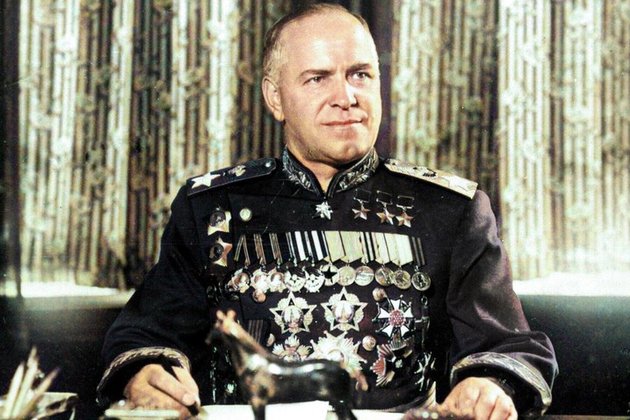 Four times Hero of the Soviet Union, Marshal Georgy Zhukov was the architect of the Red Army's key victories over the Nazis during World War II. He was always dispatched to the most dangerous sectors of the Soviet-German front.

He was one of the main authors of the triumph of the Soviet Union over Nazi Germany. Marshal Georgy Konstantinovich Zhukov was involved in formulating the most important strategic operations of the Red Army during World War II. Soldiers used to say about him: "Where Zhukov is, there is Victory." 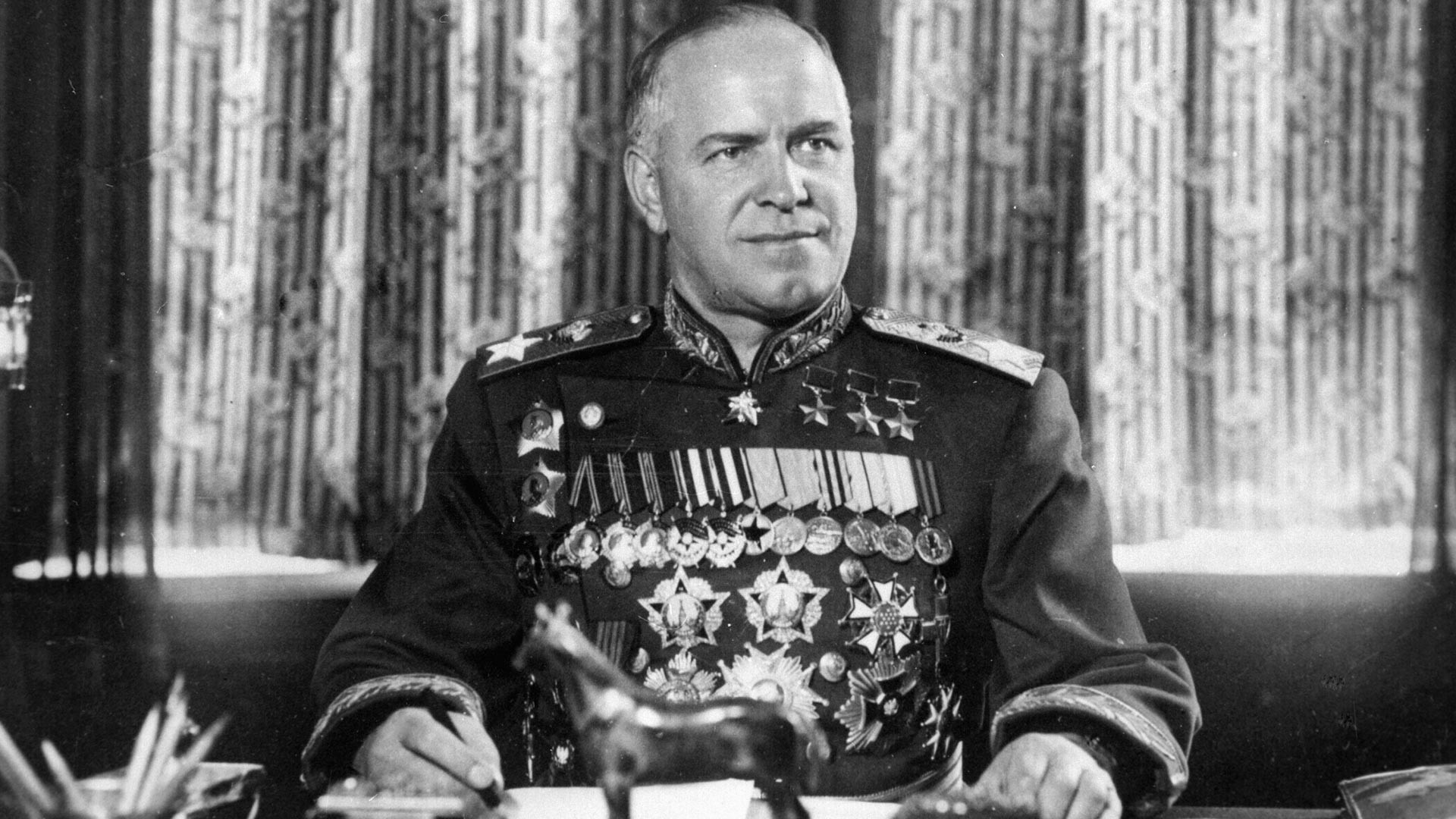 Georgy Zhukov began his military career on the battlefields of World War I, during which he rose to the rank of squadron commander and was twice awarded the Cross of Saint George. Having joined the Bolsheviks after the 1917 Revolution, he also took part in the Civil War. His debut as a major military commander happened much later - in the summer of 1939, during fighting against the Imperial Japanese Army on the river Khalkhin Gol. 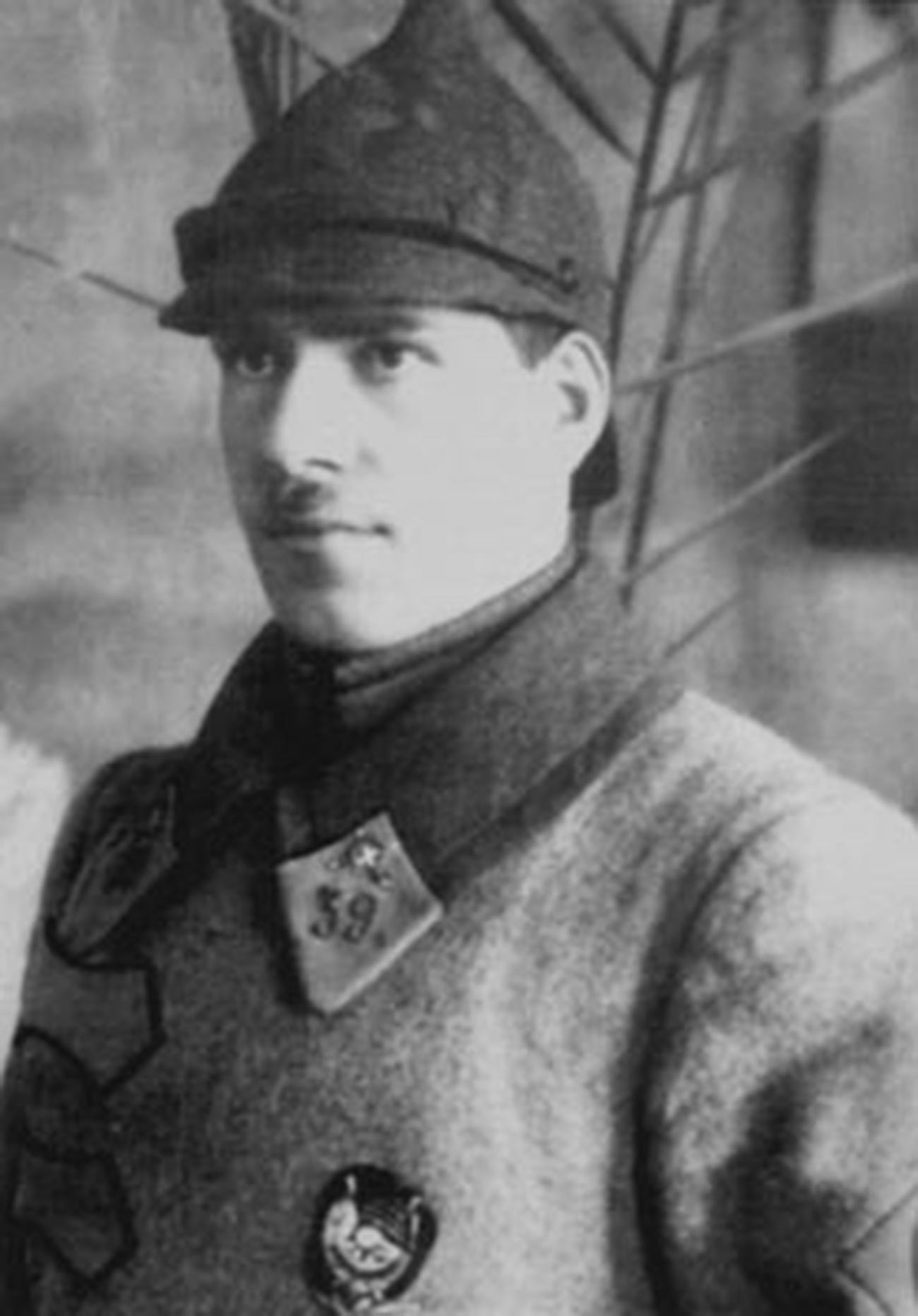 Taking command of the 1st Army Group, which was finding it difficult to hold back the Japanese after their incursion into the territory of the USSR's ally, Mongolia, Zhukov essentially turned defeat into victory. He not only repelled a planned enemy attack on the rear of his forces, but also managed to surround and destroy the enemy. "For all our troops, commanders of formations, commanders of units and for me personally, the Battles of Khalkhin Gol were a great school for gaining combat experience," Georgy Konstantinovich reported to Stalin. "I think the Japanese side, too, will now more accurately draw its own conclusions about the strength and capability of the Red Army." He was proven right - after the defeat, Japan became much more cautious in its aggressive plans against the Soviet Union. 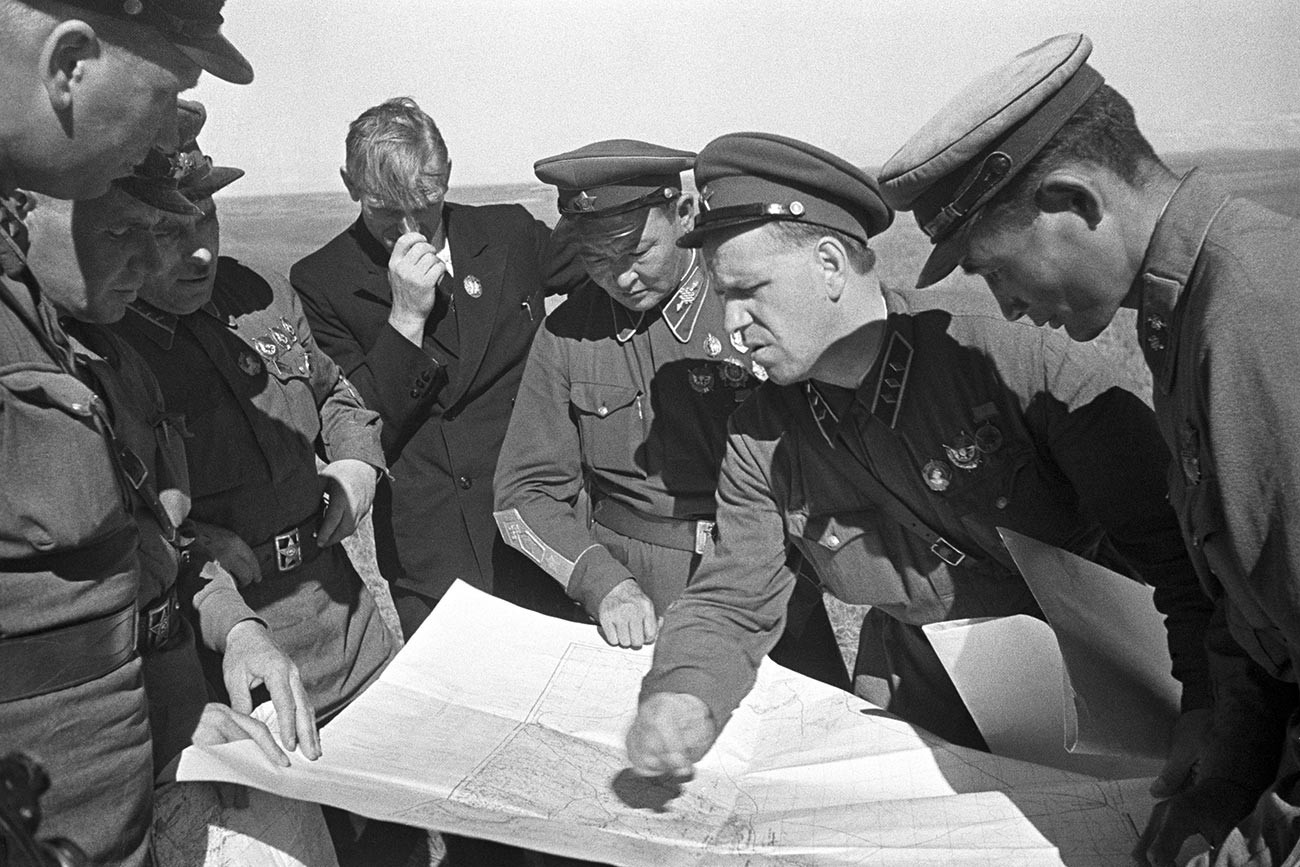 Georgy Zhukov (second right) and Marshal of the Mongolian People's Army Khorloogiin Choibalsan during the Battles of Khalkhin Gol.

"In my opinion, Georgy Konstantinovich Zhukov remains a man of strong will and determination, richly gifted with all the qualities necessary for a military leader," another distinguished Soviet military commander, Konstantin Rokossovsky, said about the general. Zhukov was never afraid to act boldly and decisively, he knew how to assess a complicated strategic situation correctly and to take the right decisions in critical and rapidly changing circumstances. He was one of the first Soviet military leaders to realize the important role played by mechanized formations in modern warfare and he learned to use them effectively. 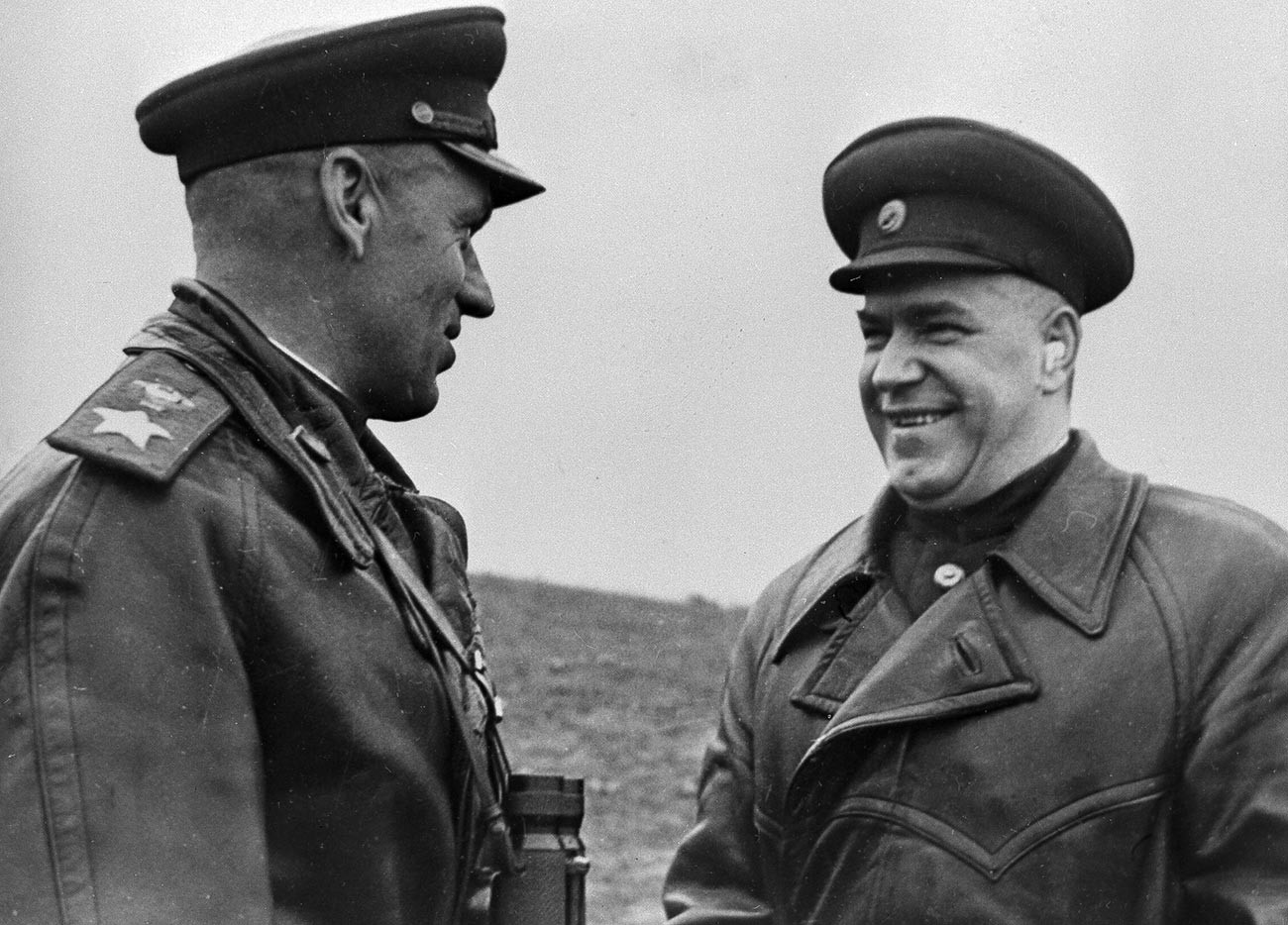 Following the German invasion of the Soviet Union, Zhukov was much in demand. He was not only a permanent member of the Supreme High Command Headquarters and Supreme Commander-in-Chief Joseph Stalin's deputy, but, at various times, he commanded the forces of five fronts. Georgy Konstantinovich was dispatched to the sectors where the most dangerous enemy blows were falling. 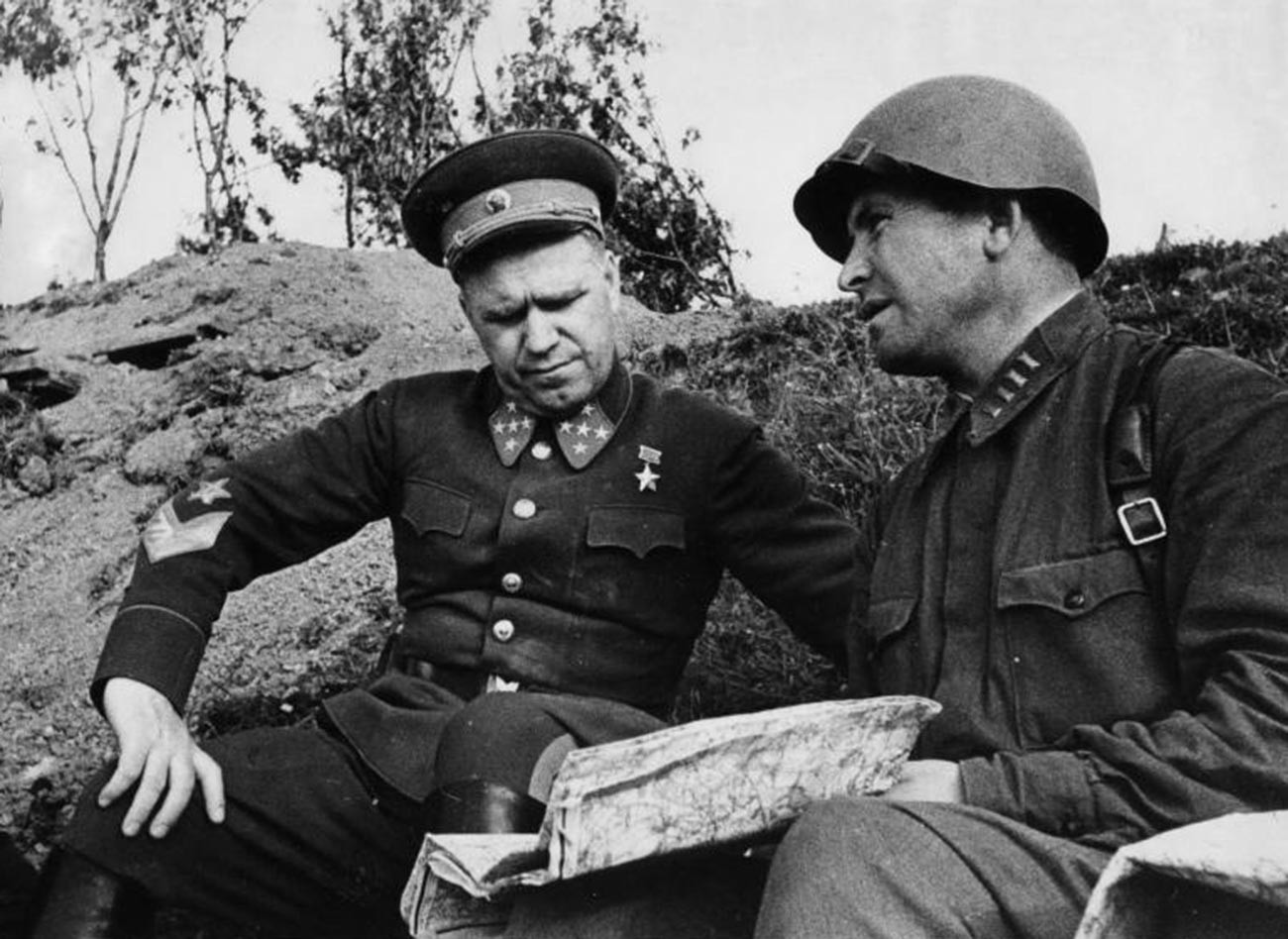 In September 1941, Georgy Zhukov arrived in Leningrad which was then on the brink of disaster. On his orders, for unauthorized retreat or abandonment of the line of defense around the city any commander or soldier was to be immediately shot. "One panic-monger could be the undoing of a whole unit; squads and platoons could suffer heavy losses because of a single coward. We all experienced this during the battles for Leningrad. Therefore I can state with confidence that Zhukov's orders helped us defeat the enemy," P. Mushtakov, one of the city's defenders, recalled. In the end, having mobilized all the scant resources of the city, the general stabilized the front and prevented the enemy from capturing the city, as well as stopping the German and Finish armies from joining forces. 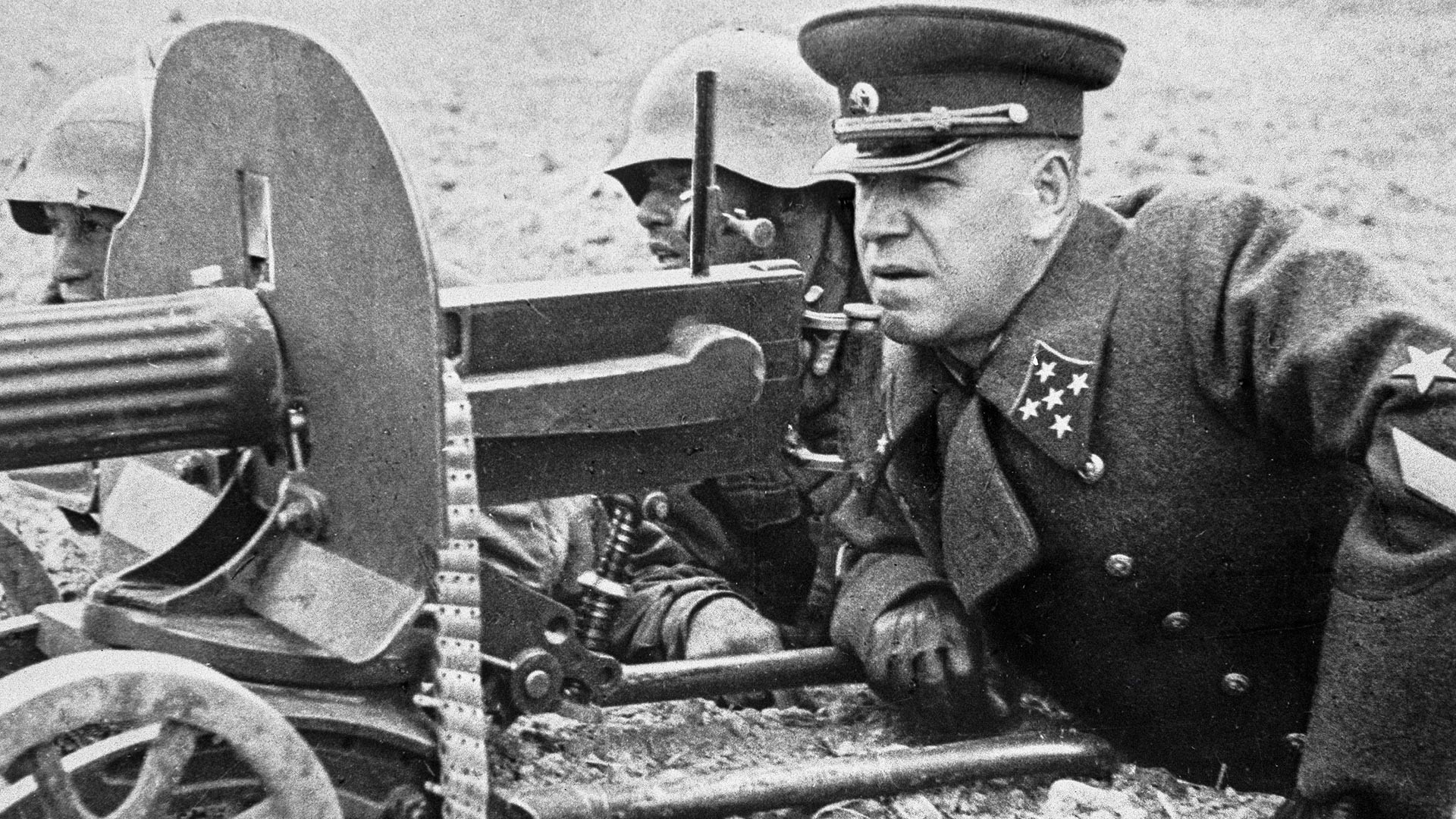 In October, with the German Operation Typhoon sweeping in the direction of Moscow, Zhukov was transferred to the capital. The troops of the Western Front under his command withstood the main enemy strikes and wore out and weakened the Germans. December 5 saw the start of the Red Army's large-scale counter-offensive, in the planning of which Georgy Konstantinovich had played an active role. As a result, the Wehrmacht were pushed back 100-250 km from the capital. "During the period of particularly bitter fighting... I personally could sleep for no more than two hours a day and, even then, it was at odd moments...," Zhukov recalled. "When the crisis of the Battle of Moscow had passed, I fell so fast asleep that I couldn't be woken up for a long time. Stalin rang me twice during this time. He was told: 'Zhukov is asleep and we cannot get him to wake up.' The Chief said: 'Don't wake him - wait until he wakes up by himself.'" 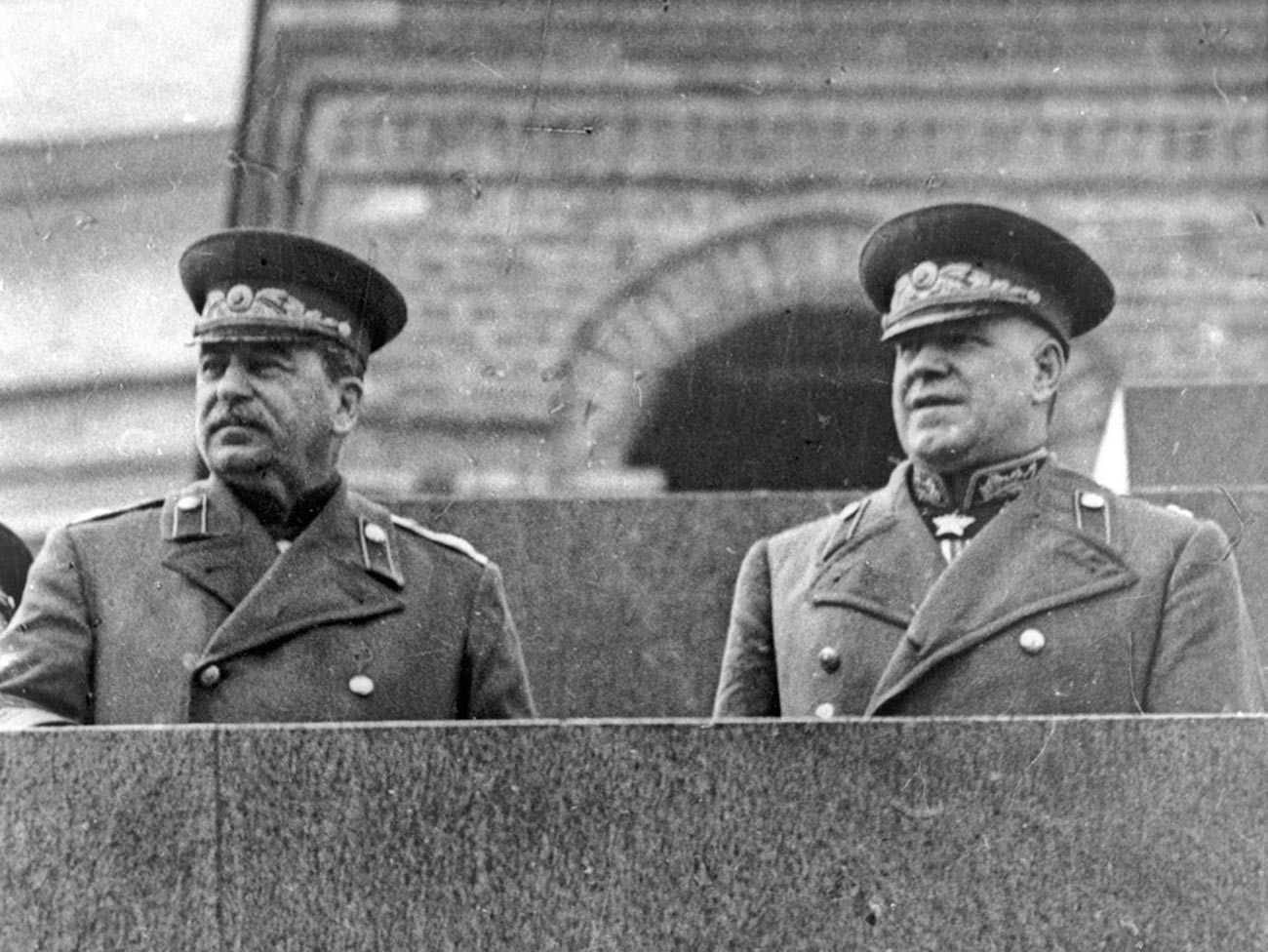 A view became widespread in the post-Soviet period that Georgy Zhukov was a real "butcher" and "poacher of the Russian people" who did not spare his men and piled the battlefield with corpses in his encounters with the enemy. However, statistics say otherwise. "He stands out for his low level of casualties," responds historian Aleksei Isaev. "If you look at the figures in relation to the total number of men on the front, he has consistently lower casualties in percentage terms than other commanders - for instance, Konev or Malinovsky. That is why he was entrusted with a front numbering a million men. They knew that he would manage to handle the front and keep casualties within moderate levels, because he really was a top-class professional." 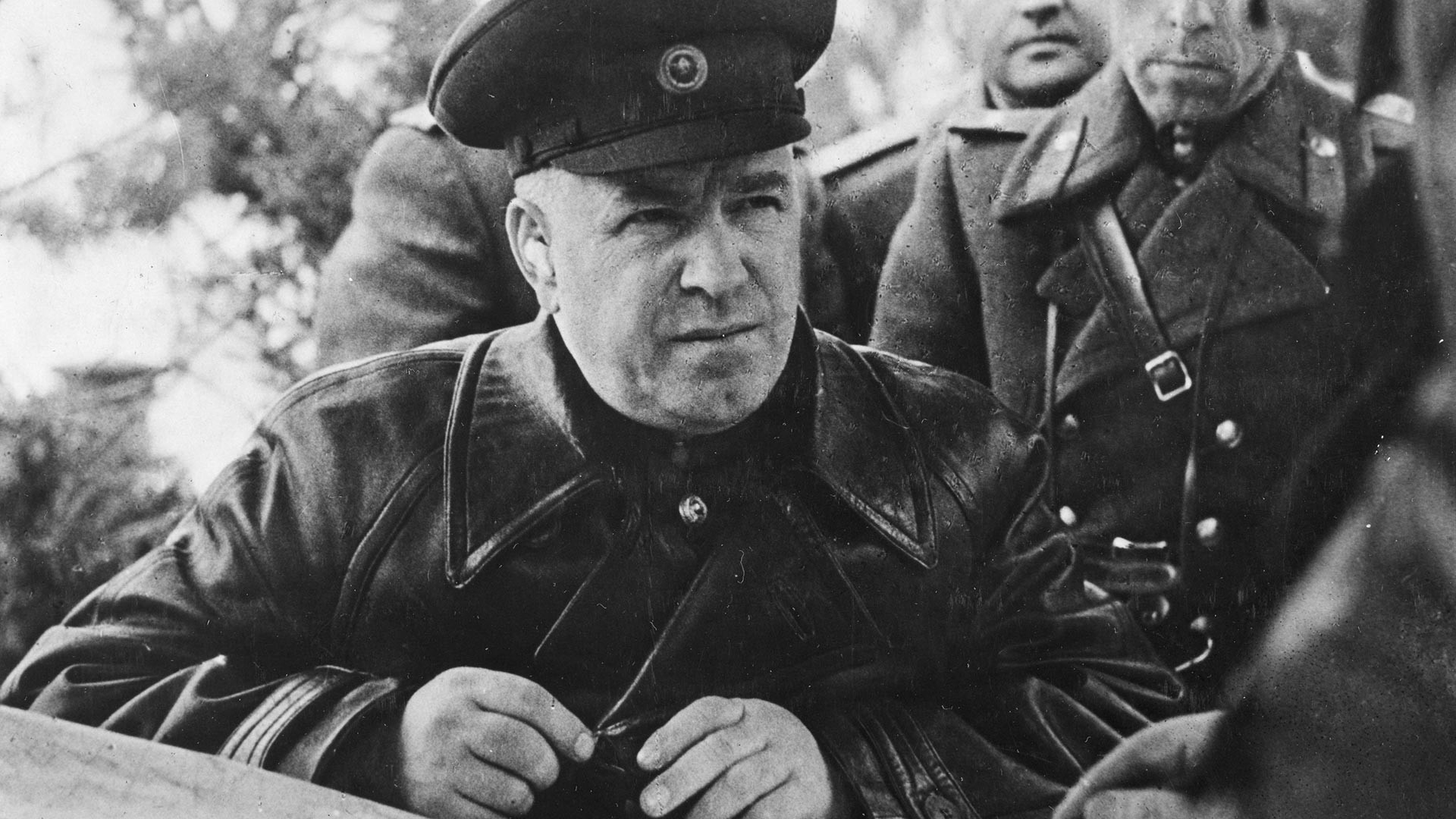 The general had to face significant setbacks, too - notably, the Second Rzhev-Sychevka Operation, also known as 'Operation Mars', which took place under his command. It began on November 25, 1942, just a week after the start of the offensive of Soviet troops at Stalingrad. Operation Mars ended in failure, but it also played a positive role. The weakened German Army Group Center was unable to send reserves to help the 6th Army of Friedrich Paulus that found itself surrounded at Stalingrad. 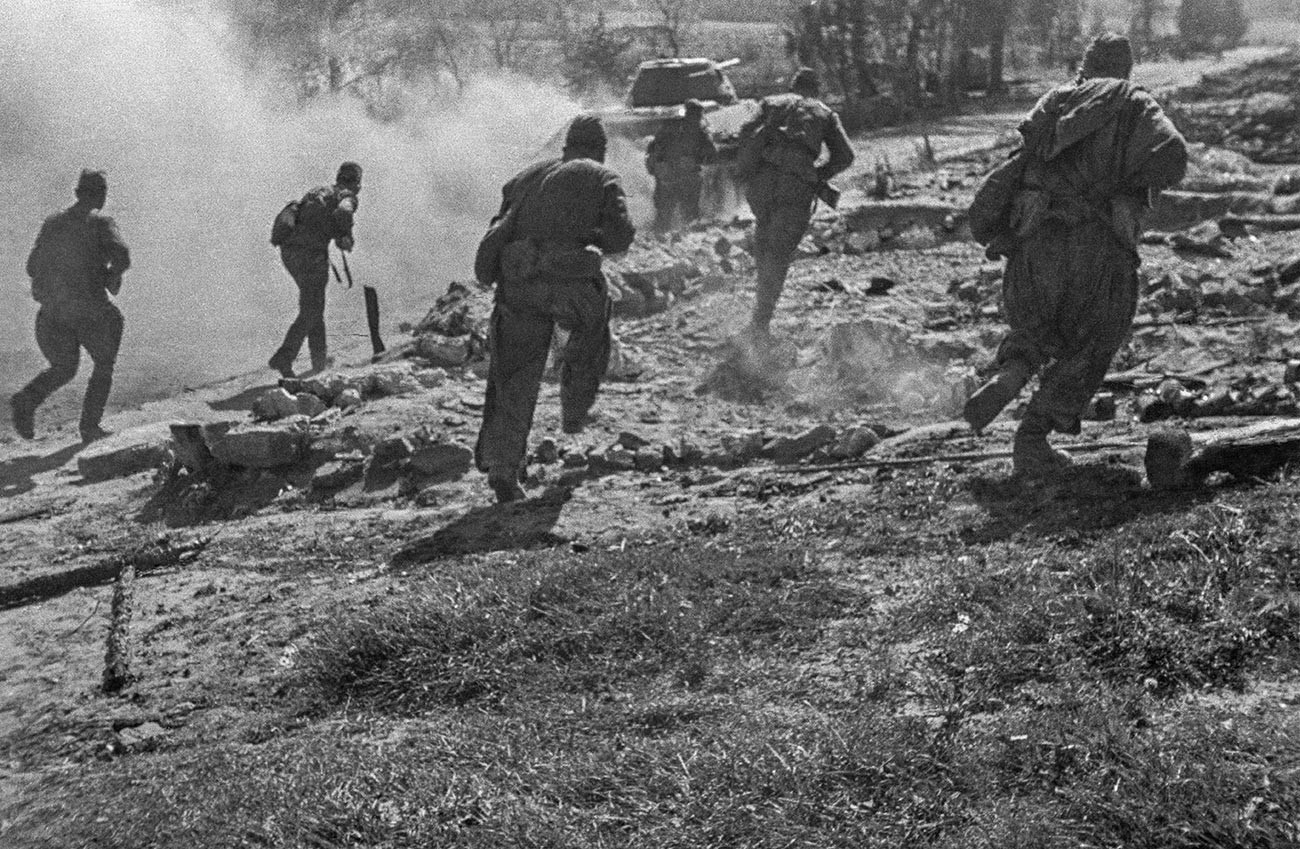 Zhukov was the architect of the Red Army's victory at the Kursk Salient in the summer of 1943, after which the Germans lost the initiative in the war against the USSR for good. It was Zhukov who had advised Supreme High Command Headquarters against mounting a large-scale offensive, but to operate from a defensive posture. "It would be better if we wear out the enemy with our defense and knock out his tanks and then, bringing in fresh reserves and going onto a general offensive, conclusively finish off the main grouping of the enemy," he had said in a report dated April 8, 1943. The plan was magnificently put into effect in July and August. 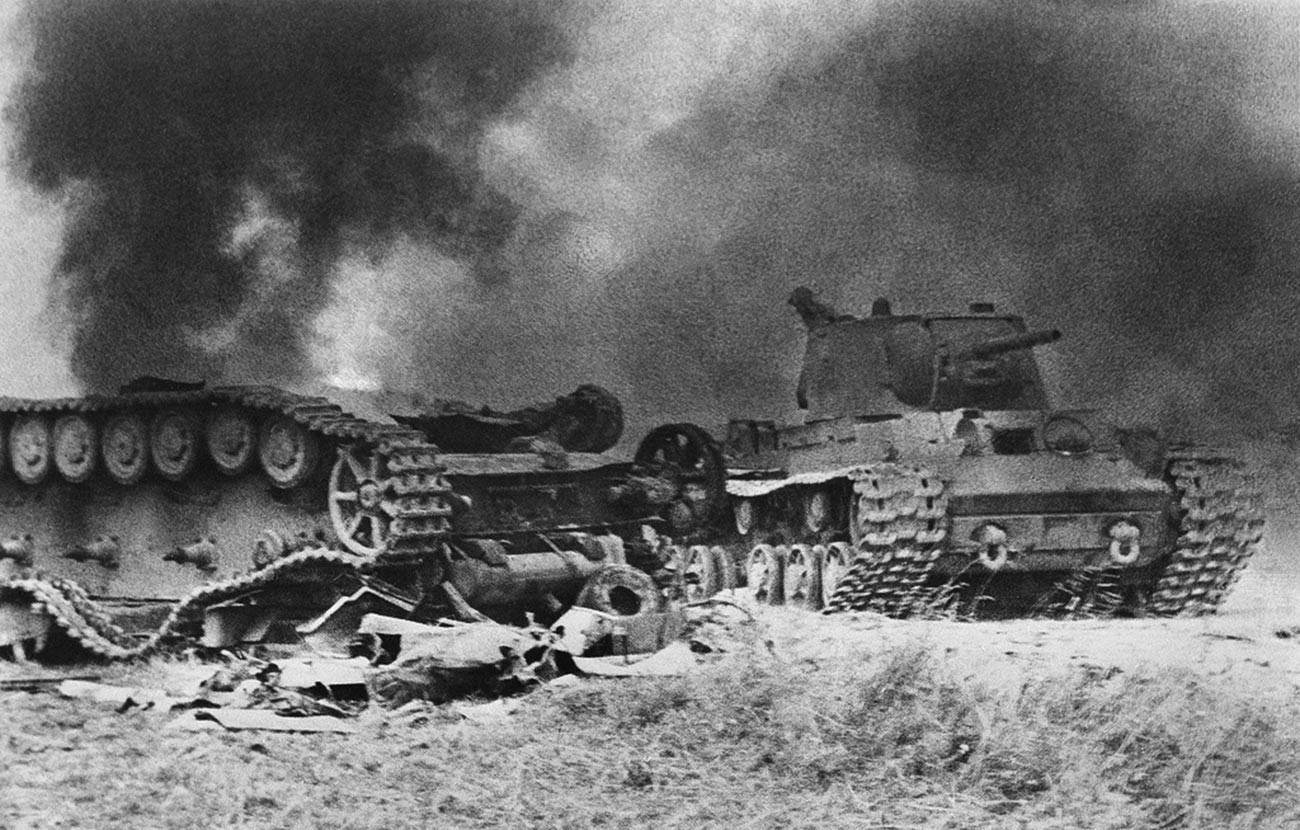 The Battle of Kursk.

Having become a Marshal of the Soviet Union in 1943, Georgy Konstantinovich Zhukov conducted wide-scale offensive operations that literally smashed and stunned the enemy. For instance, this is how General Friedrich Wilhelm von Mellenthin described the Vistula-Oder Operation in which Zhukov's 1st Belorussian Front routed 35 German divisions and reached the approaches to Berlin: "The Russian offensive beyond the Vistula developed with unprecedented force and swiftness; it is impossible to describe everything that went on between the Vistula and Oder in the first few months of 1945. It was a tragedy on an unheard-of scale... Europe had not seen anything like it since the destruction of the Roman Empire." 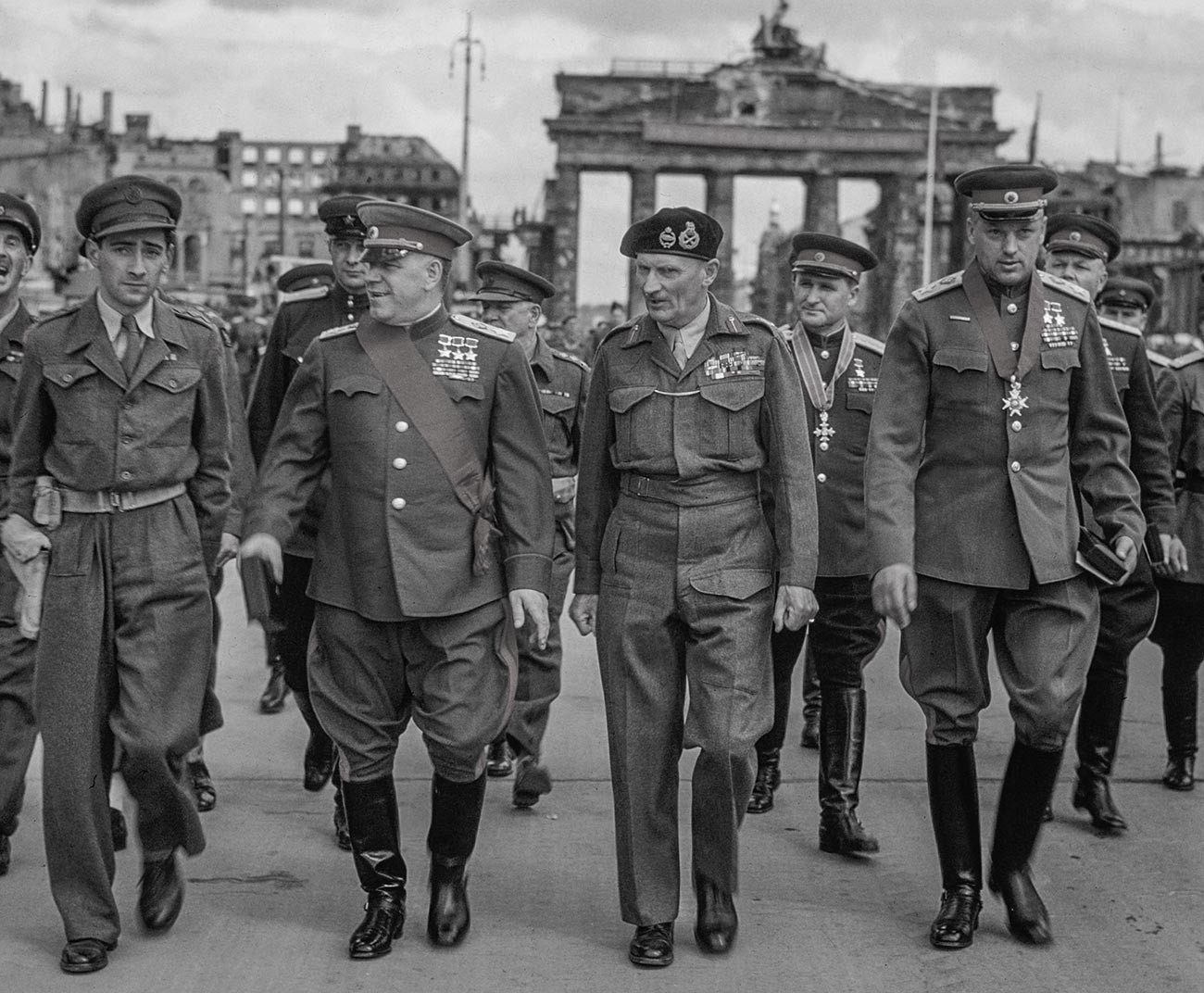 It was unsurprising that Stalin entrusted Zhukov with the capture of the capital of the Third Reich and, subsequently, with inspecting the Victory Parade on the Red Square in Moscow on June 24. Despite the fact that Georgy Konstantinovich repeatedly found himself in disfavor in the post-war period, because of disagreements with the 'Father of the Peoples' and with the latter's successor as leader of the state, Nikita Khrushchev, he always enjoyed the great affection of ordinary people, among whom he was given the nickname, 'Marshal of Victory'. For his part, Zhukov wrote in his memoirs: "The most important thing for me was to serve my Motherland and my people. And I can say with a clear conscience that I did everything I could to fulfil this, my duty." 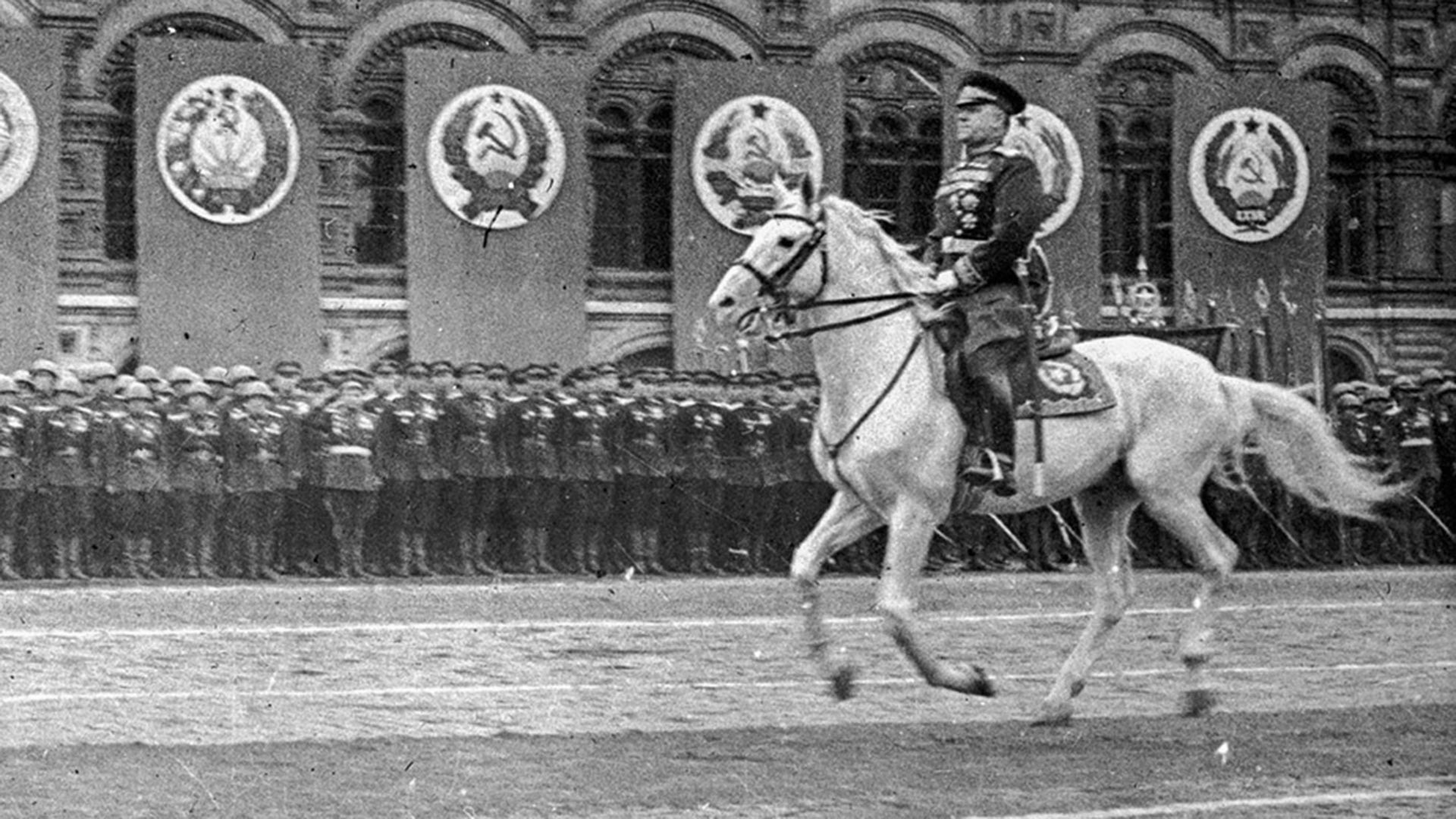 Zhukov inspecting the Victory Parade on the Red Square in Moscow.