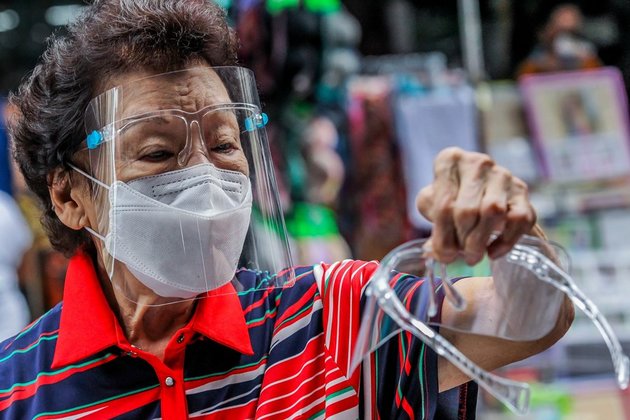 BEIJING, Aug. 12 (Xinhua) -- The world in the past 24hrs. A selection of the best daily press photos from Xinhua.

Contractors of Singapore's National Parks Board (NParks) move the seized elephant ivory for destruction to commemorate World Elephant Day, which falls on Aug. 12, in one of NParks' facilities in Singapore, Aug. 11, 2020. NParks crushed 9 tonnes of elephant ivory, worth 18 million Singapore dollars (about 13.1 million U.S. dollars), the majority of which were seized on July 21, 2019 during the largest seizure of elephant ivory in Singapore. (Xinhua/Then Chih Wey)

A woman looks at protective goggles at a market in Manila, the Philippines, Aug. 11, 2020. The number of confirmed COVID-19 cases in the Philippines surged to 139,538 after the Department of Health (DOH) reported 2,987 new daily cases on Tuesday. (Xinhua/Rouelle Umali)

Giant panda Yang Yang looks at food in the celebration of its 20th birthday at Schonbrunn Zoo in Vienna, Austria, Aug. 9, 2020. (Daniel Zupanc/Schonbrunn Zoo/Handout via Xinhua)

Tourists visit Yangjiatang Village in Songyang County, Lishui City, east China's Zhejiang Province, July 17, 2020. By the end of 2019, a total of 526 homestays have been developed and the yearly tourism revenue of the county reached 170 million yuan (about 24 million U.S. dollars) in 2019. (Xinhua/Huang Zongzhi)

A parrot is sprayed with water to cool off at Shanghai Zoo in east China's Shanghai, Aug. 11, 2020. The highest temperature in Shanghai reached 35 degrees Celsius on Tuesday. (Xinhua/Zhang Jiansong)■