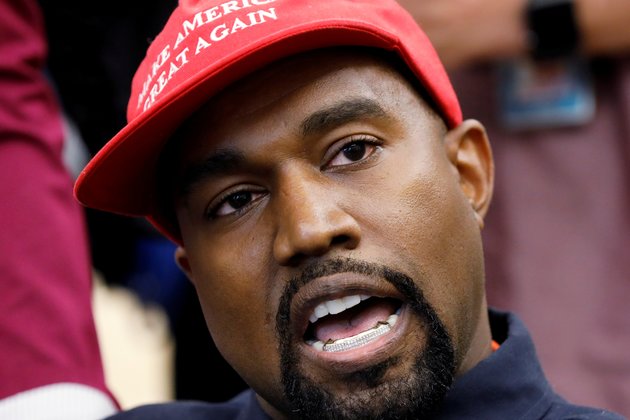 Rapper Kanye West signaled he no longer supported U.S. President Donald Trump and said he would enter the presidential race to win it, according to an interview published on Wednesday.

West, previously a vocal supporter of Trump, announced on Saturday that he would run for president in 2020. West and his reality TV star wife Kim Kardashian West have visited Trump in the White House.

"I am taking the red hat off, with this interview," West told Forbes magazine, referring to Trump's trademark red "Make America Great Again" baseball cap. "Like anything I've ever done in my life, I'm doing (this) to win."

Kanye West? The Girl Scouts? Hedge funds? All Got PPP Loans The government's small business lending program has benefited millions of companies, with the goal of minimizing the number of layoffs Americans have suffered in the face of the coronavirus pandemic. Yet the recipients include many you probably wouldn't have expected

He said he would run under a new banner - the Birthday Party.

There was no record of West filing any official paperwork with the Federal Election Commission. The deadline to add independent candidates to the ballot has not yet passed in many states.

West denied that his aim was to split the Black vote and hurt the chances of Trump's Democratic opponent, Joe Biden. It was "a form of racism and white supremacy" to suggest all Black people should support the Democrats, he said.

Trump, who hosted Kanye West in a widely publicized visit to the Oval Office in 2018, said the rapper's candidacy "would be a great trial run" and that he had a "real voice," according to an interview Tuesday with Real Clear Politics news website.

White House spokesman Hogan Gidley on Wednesday called Kanye's announcement "a scathing indictment of the Democrat Party, not just their policies on abortion, the Planned Parenthood, but also the policies that disproportionately affected African Americans in a negative way."

West told Forbes he believed "Planned Parenthoods have been placed inside cities by white supremacists to do the Devil's work." The group provides reproductive health care and education, with most of that being preventive care.

The rapper also said he had been ill in February with COVID-19, the disease caused by the new coronavirus, and would be suspicious of any vaccines developed to prevent the infection. Reiterating false theories that link vaccines with child developmental disorders, he said: "So when they say the way we're going to fix COVID is with a vaccine, I'm extremely cautious."

CHICAGO, Illinois: Greater than 96 percent of America's practicing physicians are fully vaccinated against COVID-19, according to the American Medical ...

WASHINGTON D.C.: With the introduction of a bill by U.S. Senators Michael Shumway Lee and Charles Ernest Grassley on June ...

SACRAMENTO, California: California ended the majority of its Covid restrictions this week, with a few exceptions, such as wearing masks ...

China sends 28 military aircraft across Taiwan in show of force

TAIPEI, Taiwan: Responding to criticism during the G7 summit of Chinese aggression, 28 Chinese air force aircraft, including fighters and ...

BOSTON, Massachusetts: A 37-year old admissions ticket was honored by a Boston museum, with the bearer of the ticket being ...

WASHINGTON D.C.: In defiance of China, a U.S. aircraft carrier group is sailing through the South China Sea, which China ...

CHICAGO, Illinois: The sales of vacation homes grew at twice the rate of other homes during the Covid pandemic.In a ...

Land Rover to test hydrogen as alternative to electric batteries

U.S. dollar in demand in Asia, stocks and bonds on the nose

SYDNEY, NSW, Australia - Stocks in Asia were little moved on Friday as bond yields rose and the U.S. along ...

BERLIN, Germany: Germany will end rules in June that required companies to allow employees to work from home during the ...